Michael Daugherty has a talent for making the American musical vernacular sound as fresh as when Aaron Copland began to introduce it to concert music in the 1930s. This Land Sings is an intelligent and thoughtful tribute to the life and times of Woody Guthrie, America’s folk music icon whose songs captured the turbulence of the Depression and spoke out against myriad social injustices.

Far from being mere rearrangements of Guthrie’s songs, Daugherty imagines the work as a radio broadcast (there was an original plan to bind the work together with an announcer, but this was scrapped for the sake of time constraints) to create a portrait of the singer and his times, using original music and lyrics to view Guthrie’s art and times through a contemporary lens. The “Overture,” a raucous fantasy on This Land is Your Land, makes it clear that this is a work of fun, heart, and imagination. The same could be said of “Perpetual Motion Man,” a portrait of Guthrie as he restlessly wandered the country as America’s latter-day troubadour. There are two songs I loved in particular—“Hot Air,” devilishly spoken by John Daugherty (no relation) is an accompanied monologue by a blathering radio preacher (modeled on Father Coughlin) extolling his own bigoted rhetoric; and “Silver Bullet,” a vicious song targeting gun culture, also hits close to home with its hard-hitting topicality. “The Ghost and the Will of Joe Hill” is a haunting ballad based on the 1915 execution of a labor activist and songwriter. What struck me in this one is Michael Daugherty’s imaginative musical treatment of the text, particularly with its use of drone and multiple characters—it reminded me of both Renaissance madrigal music and Schubert’s songs in this regard. It is evocative and instantly enjoyable, made even more so by Daugherty’s superb lyrics.

The performance by Dogs of Desire, the Albany Symphony’s new music ensemble under the direction of David Alan Miller, is outstanding in its crisp execution and impeccable rhythm. John Daugherty’s voice is expressive and varied, but I found the smoothness and of Annika Socolofsky’s voice simply mesmerizing. Both have excellent diction. A highly enjoyable and original work.

“During these times of turbulence and uncertainty, I think back to the songwriter and political activist Woody Guthrie, who traveled across America with his guitar and harmonica to perform songs of hope and social justice during the Great Depression and World War II. As a musical tribute to this Dust Bowl troubadour, I have composed This Land Sings: Inspired by the Life and Times of Woody Guthrie, a song cycle with seventeen original vocal and instrumental numbers, like a Grand Ole Opry radio broadcast. It is my hope that this Naxos recording, featuring the Albany Symphony’s new music ensemble Dogs of Desire, will remind us that music can spark greater awareness and bring about meaningful change.”

This Land Sings: Inspired by the Life and Times of Woody Guthrie (2016) was commissioned and premiered by the Tulsa Camerata, conducted by the composer with Annika Socolofsky, mezzo-soprano, John Daugherty, baritone and Jason Heilman, radio announcer at the Philbrook Museum of Art Tulsa, Oklahoma on April 22, 2016.  Traveling America from coast to coast with his acoustic guitar and harmonica, Woody Guthrie performed folk songs of love, wandering and social justice, including his famous anthem “This Land is Your Land,” at Workers Union gatherings, radio stations, street corners and concerts halls during the Great Depression and World War II.

To prepare for my musical tribute to this Dust Bowl troubadour, I drove for several weeks along the desolate barren and dusty backroads of Texas and Oklahoma where Woody once roamed, while listening to just about everything that Woody recorded during his brief lifetime (1912-1967). I also spent time at the Woody Guthrie Center in Tulsa, Oklahoma, researching his fascinating life and wide-ranging artistic output.

Returning to my studio in Ann Arbor, Michigan, I composed my own original songs and instrumental interludes inspired by the life and times of Woody Guthrie. Since he often performed with other folk singers and musicians on radio shows in the 1940s and 1950s, I decided to structure the work into seventeen vocal and instrumental “numbers,” like a Grand Ole Opry radio broadcast. To convey the lean times of the Great Depression I pared down the ensemble to a female singer, male singer, violin, clarinet/bass clarinet, bassoon, trumpet/flugelhorn, trombone, contrabass, percussion (one player) and optional harmonica and optional radio announcer. The music I composed gives haunting expression, ironic wit and contemporary relevance to the political, social and environmental themes from Woody Guthrie’s era.

2. The Ghost and Will of Joe Hill
Words: Alfred Hayes from his poem “Joe Hill” © 1934 by Alfred Hayes (reprinted by permission of Josephine Hayes Dean) and Joe Hill written on the eve of his execution (1915; public domain)

Mezzo-Soprano: I dreamed I saw Joe Hill last night,
Alive as you and me.
Says I, “But Joe, you’re ten years dead.”
“I never died,” says he.

Baritone: My will is easy to decide,
For there is nothing to divide.
My kin don’t need to fuss and moan.
“Moss does not cling to a rolling stone.”

Mezzo-Soprano: “The copper bosses killed you, Joe.
They shot you, Joe,” says I.
Takes more than guns to kill a man.
Says Joe, “I did not die.”

Baritone: My body? Oh! If I could choose,
I would want to ashes it reduce
And let the merry breezes blow
My dust to where some flowers grow.

Baritone: Perhaps some fading flower then
Would come to life and bloom again.
This is my last and final will.
Good luck to all of you.

Baritone: Good luck to all of you.

Both: East or West, makes no difference to me;
North or South, it’s the same!
I’ve gotta keep movin’ to the Promised Land.
I’m a Perpetual Motion Man.

Both: West or East, makes no difference to me;
South or North, it’s the same!
I’ve gotta keep movin’ to the Promised Land.
I’m a Perpetual Motion Man.

Baritone: In a bus!

Mezzo-Soprano: In a boat!

Baritone: In a train!

Mezzo-Soprano: In a truck!

Mezzo-Soprano: Down in the valley, valley so low,
Hang your head over, hear the dust blow.
Heaven was blue, now it’s brown.
Dust is blowing through every town.

Build me a castle forty feet high,
So I can’t see the dust in the sky.
Mother Nature calls to me;
Save the planet; let it be.

Baritone: Tomb of a millionaire, a multi-millionaire,
Ladies and Gentlemen.
Place of the dead where they spend every year,
The usury of twenty-five thousand dollars
For upkeep and flowers, to keep fresh the memory of the dead.

They take from the poor and give to the rich!

Robin Hood—he stole from the rich and he gave to the poor.
He was fighting the banks who come to your door
And take away your house, your belongings and more.
They fight for you; they are forced to roam.
You never see an outlaw drive a family from their home.

They take from the poor and give to the rich!

Baritone: The world was made in six days, finished on the seventh.
According to the contract, should have been the eleventh.

Mezzo-Soprano: Then God made Adam, but He was not pleased.
With a rack of ribs, God created Eve.

Both: Adam and Eve, livin’ in harmony.

Baritone: God made a garden, but He was not pleased.
Named it The Garden of Eden, was a paradise.

Mezzo-Soprano: In the lovely garden, God made a tree with fruit;
But if you eat the apples, you will get the boot.

Both: Adam and Eve, livin’ in harmony.

Baritone: Serpent slithered forth, spoke with honey tongue:
“Eve, if you eat the forbidden fruit, Wisdom, it will come.”

Mezzo-Soprano: Eve picked the apple, took a bite and cried,
“Adam, you gotta taste this; your stock will surely rise.”

Mezzo-Soprano: But God was not too pleased.

Mezzo-Soprano: And made them both to flee.

Baritone: They were all alone,

Mezzo-Soprano: Forced to roam the earth.

Both: But True Love prevailed.
They learned each other’s worth.
Adam and Eve, livin’ in harmony.

Baritone: I am a radio talk show host,
Spinning my lies from coast to coast.
Heed my words as I spread the news.
I am a genius and a real guru.
Dee dah dah…Dya dee dah…

Listen to me and my words of doom,
Riding the airwaves from Flint to Duluth.
The Left and feminists are who I hate,
Liberals—the enemy of our state.
Dee dah dah…Dya dee dah…

Talking the talk on my radio show…
Becoming famous, making lots of dough…
Sittin’ in my chair, on my bum,
Blowing your mind with all my scum!
I am a radio talk show host!
A.M. Radio is the Holy Ghost!

Drive-by media in my sights,
I divide the nation day and night.
Ruling the air-waves and distorting the facts,
Blaming the Left-wing to the max.
Dee dah dah…Dya dee dah…
Wow!

Mezzo-Soprano: As we come marching,
Marching in the beauty of the day,
A million darkened kitchens,
A thousand mill lofts gray
Are touched with all the radiance
That a sudden sun discloses.
For the people hear us singing,
“Bread and Roses, Bread and Roses.”

As we come marching,
Marching unnumbered women dead
Go crying through our singing
Their ancient cry for bread.
Small art and love and beauty
Their drudging spirits knew.
Yes, it is bread that we fight for.
“Bread and Roses, Bread and Roses.”

Baritone: Battle Royale sure is fun.
Smell the bullet. Hands off my gun!
Strike a match, Texas barbeque…
I’ve got a right to carry; so do you.
Give me liberty or give me death!
It’s a license to kill.

Open Carry, Salute in Peace…
Blood on your hands for those deceased…
Tighter regulations won’t change our mind.
Gun control is for dumb and blind.
The Second Amendment ain’t bulletproof.
Some say the laws are out of date.
Get a gun and own your own fate!

Charlton Heston, N.R.A….
Shoot to kill; it’s The American Way.
The revolution will happen again.
If you take our guns, you will never win!
Give me liberty or give me death.
It’s a license to:

Mezzo-Soprano: Don’t sing me a love song.
I don’t need to nag.
I know you’re a searchin’.
You’ve got to pack your bags.

Baritone: When I’m at home, I begin to feel
That life is passing me by.

Mezzo-Soprano: Passing him by…

Baritone: I get an itch to hit the road.
If I don’t leave, I’ll roll up and die.

Mezzo-Soprano: You’ll roll up and die.

See that valley there before me?
Will it be my new home?
No one else can walk it for me—
Rather walk there all alone.

Baritone: I am a poor wayfaring stranger
While travelin’ through this world of woe.
Yet there’s no sickness, toil or danger
In that bright world to which I go.
I’m going there.

Mezzo-Soprano: Walkin’ down this railroad track,
I got tears in my eyes,
Tryin’ to read a letter from my home.

Mezzo-Soprano: Walkin’ down this railroad track,
I got tears in my eyes,
Tryin’ to read a letter from my home.
If this train runs me right,
I’ll be home tomorrow night.
I’m nine hundred miles from my home.

Both: This world of woe.

Mezzo-Soprano: I hate to hear that lonesome whistle blow.

Baritone: I’m only going over home. 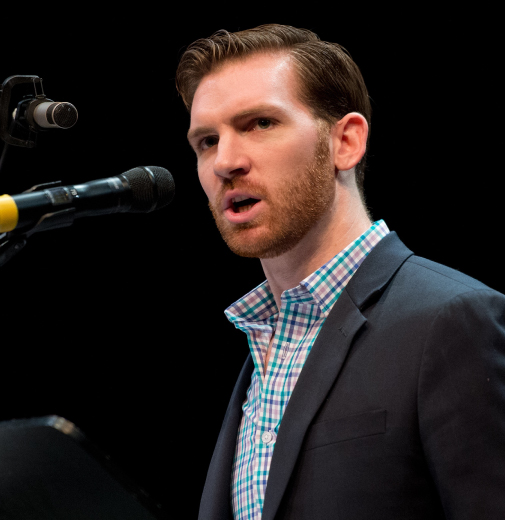 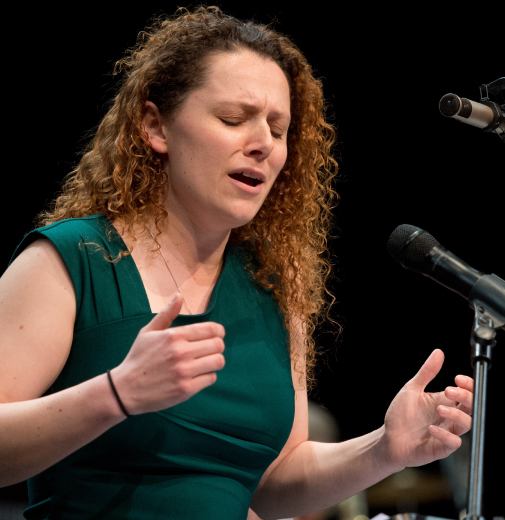 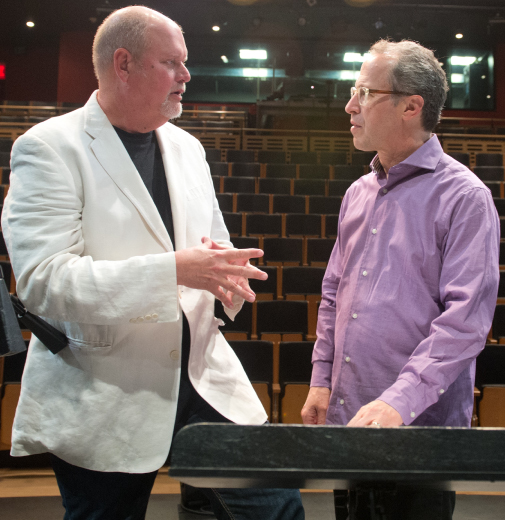 Composer Michael Daugherty and Conductor David Alan Miller at the recording session of This Land Sings: Inspired by the Life and Times of Woody Guthrie (Troy, New York, June 3, 2017) 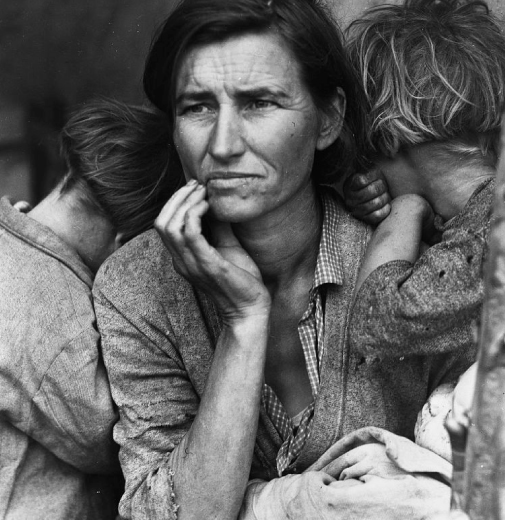